Becoming a Woman of Prayer, Courage, and Influence

In the biblical book of Esther we read about a young Jewish girl who became queen. As queen she showed great bravery that saved an entire nation. God positioned her strategically in a place of influence. She answered God’s call and went through a season of preparation physically and spiritually to get ready. God is calling modern-day Esthers to follow her example. In the book The Esther Anointing by Michelle McClain-Walters we learn how God gifted Esther with favor and called her to save a nation. Are you ready to become a modern-day Esther?

The Biblical Story of Esther

The story of Esther is an inspirational story and a powerful biblical example of how God can use anyone. Queen Esther was born as a Jewish girl named Hadassah. Her parents died, making her an orphan. Her cousin Mordecai took her in and raised her as his own. King Ahasuerus had a beautiful wife queen Vashti, who refused to be paraded before everyone at a grand banquet. King Ahasuerus was furious because his queen disrespected him and decided to give her royal position to another one. The king called for a nation-wide beauty pagent to find a new beautiful queen. Hadassah was also taken to the king’s palace. Her new name was Esther, Mordecai charged her not tot reveil her people or family. Esther received favor while preparing for twelve months to come for the king.  When it was her turn to appear for the king, she obtained favor and the royal crown was set upon her head.

In the palace a man named Haman was highly promoted by the king. Everyone bowed for him, except Mordecai the Jew. This filled Haman with wrath and he not only wanted to lay hands on Mordecai but on all his people. Haman commanded a decree to be written which said that all the Jews, both young and old, little children and women were to be annihilated. Mordecai sent a message to Esther in the palace to go in to the king to make supplication to him and plead before him for her people. She fasted for three days and asked the Jews to do the same. She went to the king and petitioned for her people. The king granted her request and had Haman, the man responsible for the threat on Esther and her people, hanged. 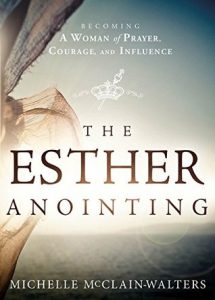 The Esther Anointing: Becoming a Woman of Prayer, Courage, and Influence gives you the keys to Esther’s success. God gave you the power of influence and the key to finding God’s favor for your assignment. God can use your life for His glory, no matter where you came from or what skills and talents you have. Today, God is positioning women and giving them divine opportunities to influence the culture for His glory. You are given a circle of influence, this can be your family, friends, neighborhood, Church, or workplace. You are strategically positioned in the place you are right now.

The biblical book of Esther is a great example of how God can use you to make an impact if you let Him. The Esther Anointing uses the biblical book of Esther to explain our divine purpose as women. It’s a book about becoming a modern-day Esther. From the beginning of the book I was hooked! Michelle McClain-Walters writes beautifully about that we are made for more. She starts after her introduction with powerful decalarations and prayers to activate the Esther anointing. While praying this something stirred within me.

Favor is used multiple times in the book of Esther. Michelle McClain-Walters explains that we are given favor according to the assignment God has placed on our lives. The spirit of favor compels people to assist us in our assignment.

The spirit of favor will position you in places of influence to bring healing and breakthrough to the generations. The anointing of favor is designed to help you help others and extend the kingdom of God here on earth.

Michelle McClain-Walters also writes about defining moments. There are moments that will define your destiny, it is shaped by your choices. God will awaken you for your purpose. When He does you will feel aroused to take action, such a call to action is usually accompanied by urgency and intensity. God asks us in His Word to choose.

I call heaven and earth to record this day against you, that I have set before you life and death, blessing and cursing: therefore choose life, that both thou and thy seed may live. - Deuteronomy 30:19 (KJV)

Life happens and it is up to you how you will deal with it. There are good times and bad times, joy and heartache. But you are called to be brave, you are a modern-day Esther! Dare to walk in God’s call on your life. Who knows whether you didn’t come into your position precisely for such a time as this?

Bible verse of the day

And God said, “Let there be light,” and there was light.
Genesis 1:3